Mr. Nankichi Niimi, writer of fairy tales and stories of the heart and soul of Chita 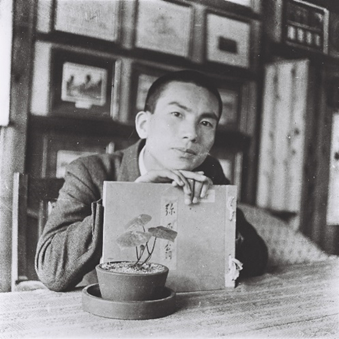 Nankichi Niimi ( real name Shohachi 1913~1943) was in the 8th graduating class in Handa Middle School. He was born in Yanabe, Handachou( now known as Handa city ), Chitagun. After he finished the Middle School, he became a substitute teacher in Handa Second regular elementary school. ( Now known as Yanebe elementary school )
Around this time, he wrote his most famous work, “Gon, the Little Fox” After finishing Tokyo university of foreign studies, he started his teaching career in Anjo women’s high school ( now known as Anjo high school). However, he fell sick with tuberculosis and passed away after his short 30- year- life.
He started writing when he was in Middle School and his works are known for their accuracy and lively depictions of humans, which is an eternal theme. He also described the beauty of nature in Chita. 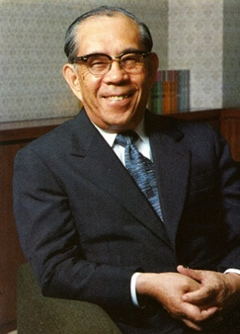 Gaishi Hiraiwa ,(1914~2007), the 7th chairman in the Federation of Economic Organization(1990~1994), was in the 9th graduating class in Handa Middle School.
He graduated from Tokyo Imperial University (currently the University of Tokyo) and started his career in Tokyo Electric Power Co. He became president, and moved on to become chairman.
He was also awarded the Grand Cordon of the Order of the Paulownia Flowers, the highest honour awarded to civilians.
He was born in Tokoname-city, which had the famous “Reikeigijuku” school in the Meiji era. According to his book, he said “I used to stay in the school dorm for a year and go to school by bicycle. I used my bike until I finished school. I remember that Handa junior high school was a quite good school and relaxing. According to Mr. Tsugio Ibayashi’s story (Handa Alumnui, 1st graduating class),

“Mr. Hiraiwa was in the war in Papua New Guinea. He nearly died, but could survive and came back to Japan. I guess he had strong will and power. He was strong because he commuted from Tokoname to Handa by bicycle everyday. It was the reason.”

He had great success in business, and became a glorious figure for the school juniors, who had high ambitions. 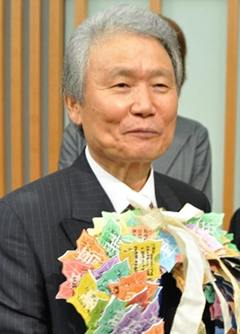 Sadayuki Sakakibara ( 1943~ )
The 13th chairman in the Federation of Economic Organization (chairman 2014~2018) was in the 12th graduating class in Handa High School.
After he graduated from Nagoya University and got a masters degree in applied chemistry, he joined Toray Industries, Inc. and he became president and later chairman of the company. Also, he is a well-known business leader and became a private member of the Council on Economic and Fiscal Policy and chairman of the Chemical Society of Japan.
He was brought up in the great natural surroundings of Mihama-chou. Also he cares about the natural beauty around Chita.